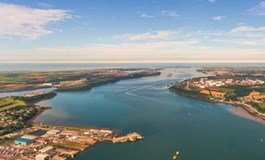 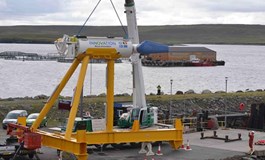 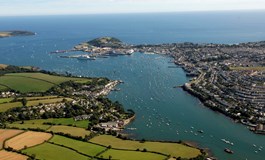 Bombora Wave Power is conducting final tests at the 1500MW Pembrokeshire Demonstration Project in Wales as it prepares to deploy its wave energy converter (WEC) technology in open water.

The system known as mWave, which Bombora describes as the "world's most powerful" WEC, can be configured to suit either fixed-bed nearshore foundation systems or floating offshore ocean environments.

Bombora COO Dave Rigg said: “In the coming months we will complete the final assembly process on the quayside in Pembroke Dock before loadout to the operational site at East Pickard Bay, where the mWave technology will be validated in the open ocean, advancing it to TRL (Technology Readiness Level) 7/8.”

Development of the £20m project is being progressed with financial support from the European Regional Development Fund (ERDF) via the Welsh government.

The technology involves a series of air-inflated concave cells covered with rubber membranes and mounted into a steel foundation structure secured beneath the ocean’s surface.

As waves pass overhead, air is squeezed out of each cell module in sequence, passing through one-way valves and into a duct system fitted with an axial turbine before being recirculated to refill each of the cell modules once the wave has passed.

The unidirectional axial flow turbine is directly connected to a variable-speed generator to produce electricity.

“It will play a crucial role proving both the reliability and competitiveness of our novel mWave technology," he added.

“Importantly, it will also deliver key optimisation data to inform Bombora’s other world-leading initiatives including the InSPIRE Project, which is under development with global EPC contractor TechnipFMC.

“This project aims to unlock the enormous potential of hybrid floating wind and wave arrays, which could play a significant role in the future energy transition - delivering a more consistent and stable clean energy supply by combining complementary power profiles.”