ENTEK has committed to the transformational expansion of its US lithium-ion battery separator footprint at a scale and a pace to meet the US Department of Energy imperative for a sustainable and resilient domestic US lithium battery supply chain. By 2025, ENTEK will have completed its first major expansion of lithium-ion separator production in the US with continued expansion through 2027 totaling 1.4 billion square meters of annual production. When complete, this initial expansion will produce enough separator material to power 1.4 million electric vehicles.

Larry Keith, CEO, commented, “ENTEK has supplied the majority of OEM automotive lead-acid battery separator materials in North America for decades, earning the trust and confidence of major automakers and battery producers alike.  Our growth and success are testament to ENTEK’s ability to scale and continually produce high quality, high-performance separators demanded by key OEMs. Combined with our robust and proprietary IP and our vertically integrated engineering and fabrication competencies, ENTEK has both the commitment and capability to supply the growing and critical US lithium-ion battery industry with US produced separators.”

ENTEK enjoys more than two decades of experience as the only US owned and US based producer of ‘wet-process’ lithium-ion battery separator materials, and continues to invest in the future of the lithium battery industry. ENTEK’s strategic US investments in lithium-ion battery separators begins with the installation of 50 million m2 of additional ceramic coating capacity at its new facility in Henderson, Nevada, scheduled to be commissioned in the first half of 2023 to support current base film production.ENTEK is excited to share that it has secured a contract with Brückner Maschinenbau to provide the biaxial stretching equipment and technology critical to the production of lithium-ion separators to meet the strict technical requirements of xEV battery producers. Brückner Maschinenbau is the world leader for biaxial stretching equipment.  This partnership will ensure market ready, high quality battery separator film to support early and exponential growth in US lithium-ion battery manufacturing.

ENTEK’s investment commitment includes the construction of two separate, giga-scale xEV lithium-ion battery separator operations. Site selection and appraisal is at an advanced stage and will be located regionally to support battery producers.

The two giga-scale lithium-ion battery separator operations will be primarily powered by available renewable energy with a focus on a reduced carbon footprint and will benefit from ENTEK’s pioneering use of environmentally sustainable processing techniques, unlike the methylene chloride extraction systems used by lithium battery separator producers in China, Korea, Japan, and Europe. 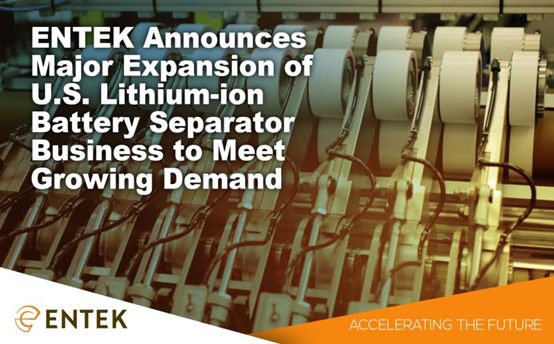