Date:2022-04-15  Author:ICCSINO
Korean EV battery prices may jump 40% in coming years, SNE says.
South Korean battery makers could raise prices by 30% to 40% to offset high commodity costs and they are in talks with electric-vehicle makers over new long-term contracts, according to SNE Research.
James Oh, SNE’s executive vice president said at a seminar, said:
“They say battery prices are highly likely to rise by 2024 or 2025.”

While the companies didn’t disclose how much they might increase prices by, those using lithium, nickel, cobalt and manganese could lift prices of battery packs as much as 40% by 2025, Oh told Bloomberg News on the sidelines of the event.
Last year, the average lithium-ion battery pack for an EV was between $147 and $153 per kilowatt hour, according to SNE Research. Batteries account for about 30% to 40% of the price of an EV.
The Near-500% Rally in Lithium Is Showing Cracks in China
Rising lithium prices are also affecting solid-state-batteries that use sulfide electrolytes, LG Energy Solution Vice President Jay Kim said at Wednesday’s seminar in Seoul.
Jay Kim, LG Energy Solution Vice President, said:
Sulfide-electrolyte-based solid-state batteries are extremely expensive compared to other types of solid-state batteries and need a lot of lithium.
“Prices of sulfide electrolyte could double from last year’s level.”
With labs in South Korea and the U.S., LG is working on commercializing sulfide-electrolyte-based solid-state cells by 2030, Kim said.
Global automakers are pushing Korean battery partners to change to prismatic-shape cells from pouch-type ones being produced now, as they believe they are safer, Oh said.
Volkswagen AG is among them, and its partner SK On Co. is likely to announce a prismatic plan soon, he said. Samsung SDI Co. is the only South Korean battery maker with the technology for manufacturing the cells.
Lee Tae Kyung, Samsung SDI Vice President said during a presentation on battery safety, said:

You need to be a bit careful with handling pouch-type cells, which have a higher possibility of swelling than prismatic ones. 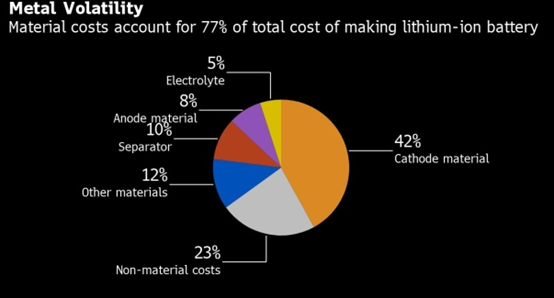